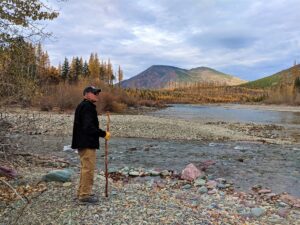 As a way to pass the time during the Covid-19 pandemic, a 95-year-old U.S. Navy veteran began looking for a new hobby to keep him busy and creative. For over a year now, Vic Holmberg has been making walking sticks that he gives back to the community.

A resident at the Columbia Falls Veterans home’s independent living area, Holmberg has set up shop in their bus garage making walking sticks. He began his operation in September of 2020, and now has put out over 100 exquisite walking sticks that he happily gives away.

Holmberg said that he started looking for sticks while on walks around the Veterans Home property, but after he started to attract attention, his caretakers began helping him look for sticks on field trips up the North Fork.

“We’ll go out there for two or three hours and fill the whole truck up with sticks,” Holmberg said.

Some of the groups he has given his sticks to include military groups like the VFW, American Legion, Vietnam Veterans of America, and the civilian Lions Club.

He stays well equipped to work on the sticks, using a Dremel tool, a jigsaw and other types of drill bits to shape the sticks, and applies a coat of polyurethane to keep them dry and from warping. Then when the sticks are done, he puts a rubber tip on the end to protect the bottom.

Although his stick-making operation keeps him busy, it was Holmberg’s military service that allowed him to stay at the Veterans Home.

Holmberg grew up on a homestead near Hot Springs. After the attack on Pearl Harbor in 1941, he remembers his teacher telling him and his classmates that most of the boys would be called to serve at some point in the war.

At 18, Holmberg was drafted into the military in August of 1945, at the end of World War II. When given the choice of which branch to serve in, he chose the Navy because his father was a Navy veteran from World War I.

He was assigned to be a yeoman while stationed on an auxiliary oiler, the USS Tolovana in the Asian-Pacific theater, conducting administrative and clerical duties. He was given this role because of the typing classes he had taken in high school. His work mostly consisted of drafting leave papers for his fellow service members, most of which can still be read in archives in Washington, D.C.

One memory Holmberg had from his time over seas was visiting Bikini Island, a part of the Marshall Islands, where the US military had tested the dropping of the atomic bomb before the end of the war. His ship was servicing a drone ship that was testing the water for radioactivity.

“As a kid, with all of the fuel we had on board, we didn’t think about what would have happened if we had gotten hit,” Holmberg said. Fortunately that never happened to the USS Tolovana.

After serving his country overseas for two years, Holmberg returned to Montana, where he worked several jobs, including being a mechanic and as a milk truck driver. Later on, he owned a vehicle service station.

When he returned to Hot Springs after the war he was 21, and he met an 18-year-old girl named Dorothy at an ice cream parlor. They fell in love after a few dates and were happily married for 42 years, and had two daughters, whom he raised on a 115 acre ranch in Hot Springs.

Dorothy has since passed away.

Never forgetting his love for the water, he also owned a fishing boat that he would take out on Flathead Lake. He enjoyed the activity of “drowning worms” as he called it to bring home dinner for his family.

Holmberg also has a younger sister who was a painter, and that creativity runs in the family. One of her paintings now hangs in his bedroom.

Holmberg is grateful for the ability to stay at the Veterans home, and is proud of the fellow service members he has the opportunity to live with. Giving away walking sticks is just one of the ways he is able to show his appreciation and something he plans to keep doing.