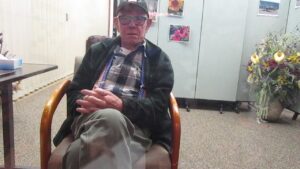 I had the honor of interviewing a Montana born native Victor Holmberg. He is a warm kind soul that shared a bit of his life with me. Here is his story. Victor and a twin brother Eugene were born on February 5th, 1927 at the Thornton Hospital in Missoula which is now known as Community Hospital.  It was a five-hour drive to the hospital for his Mother on some rough two-lane gravel roads, in a 1927 Cadillac driven by a family friend Charlie Willis.  Victor’s twin died within the first week of being at home and is buried at the Ventling Cemetery in Hot Springs. Victor had another brother die at birth and has a younger brother that lives in Hamilton and sister that lives in New Mexico.

Victor was raised on an 80-acre homestead in the Lonepine area. His parents were Rodney and Rozillia Holmberg and they raised Holstein cows, Longhorn chickens and geese.  They cut their hay with a team of horses and sold milk from their Holsteins to a creamery in Hot Springs. At that time Hot Springs had 2 Creameries in town.  His mother made comforters with the feathers from their chickens and geese. They hauled water in big wooden buckets until they moved into another place when Victor was 14 years old. They had an outhouse with a Sear Catalog and no home phone- as he chuckles. Victor fondly remembers his mother teaching him how to shoot a gun because his father never had much to do with guns, and his Mother was the hunter in the family.  Victor could also remember the Big Helena Earthquake.

Victor stated he remembers starting school around age six and walking about a ½ mile to the schoolhouse. He went to this same school for 12 years and graduated with a class of six students. Just past his 18th birthday Victor went to Missoula to enlist in the service and was told he was “too old”. He then had to wait until he was drafted which was a very short time later.

Victor was in the Navy and boot camp was in San Diego. He was in the V6-S program where he worked as a Yeoman on a fleet oiler that hauled gas for the tankers. As a Yeoman he typed all paperwork for the Ship as well as all papers for the men going ashore.  He says the paperwork had to be “LETTER PERFECT”.  He visited Washington D.C. about 50 years later and some of the papers he had typed were there on display. During his 2 years in the Navy he traveled to China, Korea, Japan and the Marshal Islands.  Victor was discharged in Bremerton, Washington and headed home to Montana.  A bus took young Victor to Elmo, Montana where he had expected someone to pick him up since he had sent a telegram announcing his arrival. But no one was waiting for him at the bus stop.  So, with seabag in his hand, he started the 25 mile walk home.  About 4 miles into the walk, he came across a dead horse in the middle of the road and a little farther an overturned bread truck with no one around. He walked a little farther when a family friend “The Preston’s” came by in their car and picked him up taking him the rest of the way home.  Once he was at his Parent’s home, he found out that the telegram had not be delivered to his parents, so they were very surprised to see him.

Victor says that he bought his first new automobile in 1950, and that he has owned 71 cars in his lifetime.  Work Started out by delivering for the Creamery in the milk truck, worked around the Creamery and part time at the Service Station working for the Bylers.  He would then on March 1, 1950 buy a service station that he owned and operated “Vic’s ENCO Station” for 22 years.  He also drove School Bus for 13 years, before he retired when he was 64 years old.

His hobbies included buying cars, raising hay/working the land and time spent fishing and hunting with friends.  He loves to laugh, his favorite food is fried chicken, bright colors, and he has kept a journal since 1964.  Victor is a delightful man, very soft spoken and it was a pleasure to visit with him.  As a matter of fact, he has invited me back for a visit.