In our busy worlds, we often run into people who have important roles in making things work but who rarely get credit where it is due. Western Montana Area VI Agency on Aging would like to introduce to you, two such individuals, that play a vital role in keeping the Commodity Supplemental Food Program (CSFP) working throughout the State of Montana. Their names are Corey and Ron. They are the drivers that deliver the food from the warehouse in Helena, MT to the local distribution sites. In fact, their jobs are even more involved than just CSFP as they deliver to other nutrition programs in a multi-state area and each log 4,500 to 6,000 miles each month.

Corey was born and raised in Helena, is married, and has two grown children. He has held a Commercial Driver’s License (CDL) for about 35 years and has been in his current position for 22 years. Corey loves his job and his employer. He says that most of the challenges he faces are weather and road conditions and occasionally other drivers which at times can be difficult.

Corey said that he has made many friends through the years and has enjoyed the people a great deal. He also admires the beautiful scenery that he has an opportunity to take in daily as he drives. He loves the fact that our region has four seasons, and he gets to work outside and experience all the seasons.

Ron has been driving commercially over 41 years.  He lives in the Helena area and enjoys the outdoors and all that comes with it. Like Corey, Ron has deep Montana roots. He is an avid sportsman, and he has grown up hunting and fishing the area with his family and friends.  Ron is married, has two children and two grandchildren.  He values people and really enjoys working in his position with the State, and he has been with the State of Montana as a driver since 2008.

Ron also appreciates the opportunity his job offers, which allows him to take in the beauty of the scenery across the treasure state.  However, road conditions and weather at times pose a challenge, but as we spoke to him it appeared to us that he seems to take it all in stride. What Ron will remember most about his career are the people and friends he has made through the years.

We were able to spend a day and watch Ron in action as he delivered commodities in Sander’s County. It was interesting to see how he transitioned at each site in doing his job and connecting with the people. It was also clear that sticking to the scheduled delivery times was important to him. Most of the individuals on the local level that work with the CSFP program are volunteers. Many are older and some have mobility and other health challenges. The Drivers are very accommodating and are a vital piece to make this program happen.

Our agency wants to express our gratitude for the amazing contribution that Corey and Ron make to the services in our area and throughout the state. We understand that the private sector offers many wonderful opportunities in relation to income and incentives, and we are lucky to have such great individuals working for the State of Montana. Their commitment and dedication help make it all work. We appreciate you. 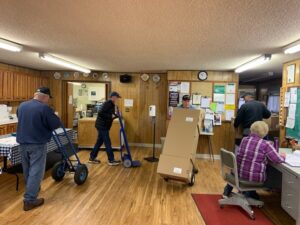 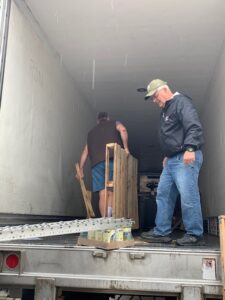 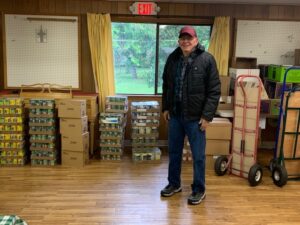 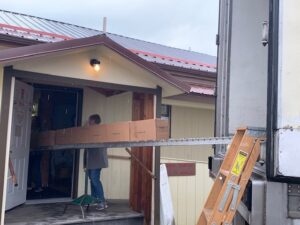