Lets Veterans hire their own caregivers

When it comes to their care, VA’s “Veteran Directed Care” program puts Veterans at the top of the chain of command.

“Veterans are in control,” says Lori Cox, Veteran Directed Care manager. “VA gives them a budget based on their care assessment. They can hire their own caregivers, purchase approved goods and services. There are many options to keep them independent.”

Navy and Army Veteran Caren Scalla is exactly the kind of Veteran the program was designed for. She joined the Navy in 1973 to help her mom provide for seven kids. “I ran the mess hall, opened it up every morning,” she says. “I totally loved it.”

But as time went on, fibromyalgia began to get the better of her. Now, wheelchair bound and suffering from cognitive difficulties due to a service-connected traumatic brain injury, she needs help from her daughter, Shannon Jacobs, and her grandson, Michael.

“I started crying… it was such a blessing.”

Jacobs is devoted to her mother. “I want to be able to care for her the way she cared for us as kids,” she said. But practical realities almost made that impossible. Driven by the ongoing struggles and challenges of juggling her job with the needs of her mother, she called a VA social worker to describe their need for help.

“I got a phone call back and Corey said, ‘I want you to know I just approved your mom for the Veteran Directed Care program,’ and I just started crying because it was such a blessing.”

“The goal of the program is to provide the resources needed to keep Veterans in their own home,” said Corey Crutchfield, social worker with the John J. Pershing VA in Poplar Bluff, Missouri. “Veteran Directed Care is a good program and we want more Veterans to know about it.” 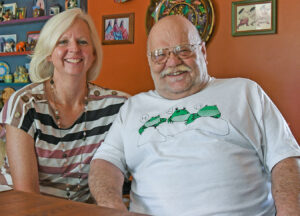 Scalla wants to help spread the word. “It makes a difference, being able to hire your family instead of a stranger coming in to help with stuff like giving you a bath.”

Bashaw joined the military in California in 1965 and did two tours in Vietnam. After his return, he buried his experiences for a long time. “I signed up for VA in the late ‘90s,” he said. “As I talked to the psychiatrist, I broke down and realized—whoa—maybe there’s something here. I started opening up and talking to people. I realized it’s good to let it out.

“I have a hip that’s bone-on-bone,” Bashaw added. “My neurologist said it’s the worst she’s ever seen and I’m waiting for that to get fixed. I got referred for some help by my doctor and then Lori showed up. It seemed like a good plan.”

His wife acts as his caregiver. Would he recommend the program? “Oh absolutely – heck yeah. And Lori’s been an ace.”

“Compensation for people taking off work to care for me.”

Air Force Veteran Thomas Ellington has been using the program since January. Medically retired from the military in 1994, he has a degenerative condition that is affecting his mobility. 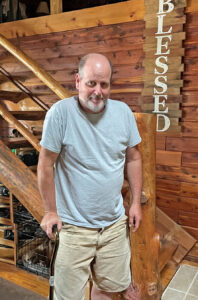 Participation in Veteran Directed Care has helped. “It’s financial compensation for people who are taking off work to care for me. Now I can compensate them and, for me, that’s a big deal. They don’t have to choose between helping out dad and having a short grocery bill.”

Ellington’s wife and daughter help with his care. “If it wasn’t for this program, I don’t know what we’d do. She’d just have to quit her job. We’d just have to let things go. It’s been a godsend.”

It’s more than just having someone to help with his care, Ellington said. “The flexibility takes a lot of stress off the Veteran.  I like being in charge of my own care. I’ll take any autonomy I can get right now.

“Knowing there’s a program that’s going to keep me here at home instead of putting me in a managed care facility. VA’s got them and I’m eligible for them, but I would prefer to be home as long as I can before they put me in one of those. If I can stay home as long as I can before one of them has to just totally quit work and take care of me, that’s just a win for me and this program makes that happen.

“These people have been awesome and this program has been fantastic. It gives me a budget and it’s flexible. It allows my needs to be met. I really like the program.”

“VA has always been there for me,” Scalla agreed. “They’ve always taken care of me. They’ve made sure I had what I needed. And us being here together in this house is really important. To have a program like this is so wonderful. If you get on this program, it helps your family to stay together.”